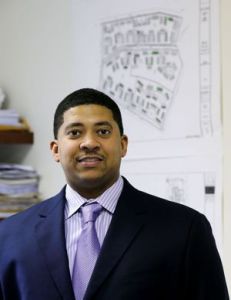 "It was with Southside Community Development Corp. for $7,500," he said. "We did some tuckpointing on a foundation."

That first contract led Canterbury Enterprises to work with the Richmond Redevelopment and Housing Authority and the Better Housing Coalition, building new residences and refurbishing older ones.

"But I always knew I wanted to do commercial construction, so the staff I hired back then for residential work had commercial experience," Burr said.

Today the company has become a commercial construction powerhouse, especially on higher education projects, where Canterbury has worked with at least 10 universities or colleges as a prime contractor or has partnered with bigger construction management companies as a subcontractor.

Two of the biggest projects were the University of Virginia's College of Arts and Sciences research building and the university's new information technology and engineering building. Canterbury worked with Richmond-based W.M. Jordan on those projects.

As Canterbury was growing, Burr said he picked the brains of B.K. Katherman, owner of Katherman & Co., and Mike Chaney, owner of James River Exteriors and James River Stucco.

"I would ask them what they'd do again, or what they'd not do," Burr said. "They taught me the basic principles of business: doing quality work, having on-time delivery and returning calls promptly. ... They're all common business practices, but people can forget about them."

Another mentor was his father-in-law, Phil Thompson. Thompson owns One Number Information Systems and gave Burr his first job after graduation from Longwood College, where Burr played basketball.

"He offered me a project management job after graduation," Burr said. "I became his right-hand man, going to State Corporation Commission meetings and site-contractor meetings. I got invaluable business experience and learned what sort of questions to ask when meeting with customers."

"With the owners of those companies, I can pick up the phone to talk about my concerns or to get advice on issues," he said. "They really want to see Canterbury succeed to the next level as a contractor."

Todd Donaldson, Hourigan's executive vice president of operations, has worked closely with Burr on projects. He said Burr's succeeded in building his business because he builds strong relationships with other contractors and puts good processes in place.

Aside from advice from his father-in-law, Burr also talked business with his wife, Gena Burr. She's the owner of GTT Enterprises, a staffing company.

Gerald Burr recently received the Metropolitan Business League's Entrepreneur of the Year. That recognition came three years after Canterbury and W.M. Jordan shared the MBL's Trailblazer award, which recognizes partnerships between big companies and smaller ones.

"I think that entrepreneur of the year award is a compliment to all of my mentors," Burr said.

Jacob Geiger director of Work It, Richmond. He can be reached at jgeiger@workitrichmond.com or (804) 649-6874