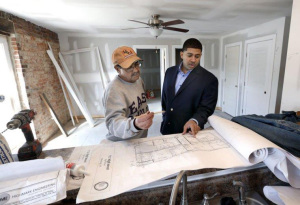 Taken by P. Kevin MorleyGerald Burr Jr., president and CEO of Canterbury Enterprises, right, and project manager Ken Pugh review blueprints for an apartment project being built in a Petersburg building on High Street in Petersburg.

Thornton and Burr are local black business owners whose companies have survived the country’s deep recession and are in position to take advantage of the recovery.

The recovery has been painfully slow, and for some minority businesses the path has been particularly steep.

Thornton owns five McDonalds franchises in the Richmond area. Burr is president and CEO of Canterbury Enterprises, a general contracting company based in Chester. Both understand the struggles that other minority entrepreneurs have encountered.

“You can’t get a loan” to start a business or to expand, Thornton said. “A few years ago, if you had a couple of successful franchises and you needed $300,000 to remodel, you could state your case and the banks would listen. Now, it wouldn’t matter if you had 50 franchises.”

Thornton said government programs remain in place to encourage loans for minorities and small businesses, but “the guidelines have become very stringent. … Even for an established business, there is much more scrutiny.”

Kenneth N. Daniels, a professor of finance at Virginia Commonwealth University, said lending institutions aren’t basing loans on a business’ potential for success. “They’ve got to have some collateral,” he said, to reduce their risk.

Minority business owners, he said, are often unable to offer the necessary collateral, especially in a distressed economy. In the past, he said, banks could sell such loans on a secondary market to reduce their risk, but during the recession “that secondary market collapsed.”

Like Thornton, Burr has remained successful. Recently he was named 2012 Entrepreneur of the Year by the Metropolitan Business League — but he has been through some belt-tightening. He had 30 employees in 2010. Now he has 20.

“We have some projects on the horizon that will be creating some jobs,” he said, “but I wouldn’t say we’ll be back up to 30 right away.”

Daniels said Burr’s wait-and-see approach to hiring is typical among minority businesses, given the pace of the recovery. That caution among black business owners, he said, contributes to the unemployment gap for blacks.

Businesses owned by Latinos have felt the recession’s impact more deeply than black-owned businesses because of Latino concentration in construction, Daniels said.

Blacks around the country have wanted to penetrate the housing construction business for years, he said. “They haven’t been very successful. This may have turned out to be a blessing in disguise.”

Construction accounts for 14.1 percent of Latino-owned businesses nationally, he said, citing a Georgia Tech study. The prolonged housing industry slump has been a heavy burden on those businesses, forcing many to close.

He said government procurement “plays a crucial role in minority business development, and the Obama administration has been very aggressive in making opportunities available for women and minority business. If I were to give a grade for this effort, I would call it a B-plus.”

But, he added, “On the state and local fronts, the news is not as good.

On Saturday, state Sen. A. Donald McEachin and Del. Delores L. McQuinn took up that point. They convened a forum to point out that minority and women-owned businesses “are grossly under-represented in the economic prosperity of this state.”

They cited a state study — first conducted in 2004 and updated in 2010-11 — showing that only an estimated 3 percent of Virginia’s purchasing power went to minority-owned and women-owned businesses.

McDonald’s Corp. boasts that 45 percent of its franchise owners are minorities and women. Freda Thornton is among the first black female McDonald’s owner-operators in the company’s Richmond territory.

The territory has 71 franchises, all locally owned and operated. There are six African-American franchisees who own 18 restaurants, the company says.

McDonald’s has a career-development program for blacks that helped Thornton make her way up the corporate ladder from her start as a crew member at one of the company’s restaurants. It has a mentoring program and an African-American Council.

The career nurturing provided by the company paid off for Thornton in 2009, “when the bottom fell out” of the economy, she said. She was able to bring her finance and management skills to bear, tailoring inventory to demand.

“McDonald’s has a great value menu,” she said, taking the opportunity to plug the product, “but that’s not all we have to be aware of. Our customers may go for that menu, but they may not do it quite as often as they used to.

“We have to adjust,” she said. “When you come in the front door, we have to have excellent customer service. When the truck pulls up to the back door, we have to know what we need and how much we need.”

Burr could have been dealt a crushing blow by the housing industry slowdown if he hadn’t been paying attention. In 2007, he moved his company’s focus away from startup housing construction.

“The opportunities were starting to dry up,” he said. “There weren’t as many first-time buyers … inventory was stacking up. We saw that as a red flag and we started trying to create another revenue stream.”

Canterbury Enterprises instead concentrated on projects for universities and non-profits. Burr established a reputation for his company’s work with larger construction firms as “a first-tier sub-contractor or a team partner,” he said.

One of the companies Burr works with is Newport News-based W.M. Jordan Co., a construction company with a $12 billion project portfolio. Burr’s outfit and Jordan have worked together on projects at the University of Virginia and other sites. They’re just beginning an expansion and remodeling project at the Covenant Woods retirement facility in Hanover County.

Construction firms like W.M. Jordan have minority-participation goals to meet for publically funded and some privately funded projects. Skip Smith, a vice president with W.M. Jordan, said Burr’s company is a reliable partner that does good work and has exemplary business ethics.

“And we want to help his company grow,” Smith said. He said W.M Jordan goes beyond minority-participation guidelines to conduct its own mentor-protégé program, “because we want to do it.”

Smith said that every six months or so, “I sit down with Gerald and we talk about his business plan, his financial statements, his insurance plan.” He said sometimes W.M. Jordan’s business staff confers with Burr.

VCU’s Daniels said W.M. Jordan’s approach is one that more primary contractors should adopt. He said some larger construction companies regard smaller minority contractors as competition and do the minimum required to meet the goals to qualify for government contracts.

Burr said his advice to minority contractors would be to “find a strategic partner so you both can bring value to the project, and to control your growth.”

Oliver R. Singleton is president of the Metropolitan Business League, a small-business organization with about 400 members in central Virginia, many of them minority-owned. He said he knows the details of many members’ business ventures, and that although the recovery has a ways to go, “my sense is that things are better.”

Singleton recalled a friend and MBL member who came to him four years ago. “He had rented business-incubator space,” Singleton said. “He couldn’t pay the rent any longer. He was losing his house and losing his wife.

“I don’t hear stories like that now,” Singleton said.

He said small businesses — minority-owned and otherwise — are a major force in regional employment and worthy of support programs. “Not a whole lot is being done to foster these businesses that drive our economy.”

Daniels said he is optimistic about the future for black businesses, despite hardships during the economic malaise. His outlook springs in part, he said, from a change in the African-American workforce.

“The image of black businesses in the past has been hair shops and restaurants,” he said. Now, he said, many minority families have their first and second generations of college graduates.

As a result, he said, America is poised to reap further rewards of 1960s Great Society policies that have “trained a legion of educated minorities that can produce firms in every sector of the economy, from technology to farming.”