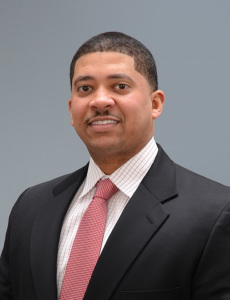 As a Virginia Native, Junior Burr has deep roots within the community.  His athleticism and drive to compete earned him a basketball scholarship to Longwood University.  He graduated from Longwood University with a Bachelor of Science Degree in Business Management and a Minor in Management Information Systems. He completed his internship with One Number Information Systems, Inc. (ONISI) and upon graduation, he accepted a full time position with ONISI and managed the Miss Utility program for the States of Virginia, Indiana, and Florida.

Under the guidance and mentorship of the company’s owners and husband and wife team, Junior worked day in and day out to achieve his dream of one day becoming a business owner himself.  He mastered the art of structuring business deals, selecting the right business partners, managing growth, and establishing and maintaining long term relationships.

During his tenure at ONISI, a new division was formed wherein the company began purchasing real estate, and eventually, that venture took off.  It was at that time that Junior noticed that the same real estate agents who facilitated the initial purchase of the property were the same ones who later sold the property after renovation was complete.  Junior’s interest was peaked at the thought of being able to receive compensation from all aspects of the real estate transactions.  He resigned from ONISI in 2002 and spent a year to create a business plan, obtain his real estate license, and become a licensed Class A Contractor.

After receiving the appropriate licensure and spending invaluable time with 2 business owners (Mike Chaney and BK Katherman) in the contracting and real estate development business, Junior approached the CEO & CFO of ONISI with his business plan.  He wanted to facilitate the prospecting, purchase, renovation and sale of real estate properties that would fit the ONISI business model.  Junior’s proposal was accepted and Canterbury Enterprises was founded in 2004!

The name Canterbury was selected because of his personal fascination with the architectural designs in England and the name resonates because the Father of English literature, Geoffrey Chaucer authored the Canterbury Tales.

Although Junior wasn’t a designer, he envisioned the finished product to be of similar quality.  He worked toward establishing Canterbury’s foundation, and then began meeting with all of the non- profit organizations within the city of Richmond.

The first project awarded to Canterbury Enterprises, was a $7,500 contract with Southside Development and Community Housing.  This initial project created a snowball effect that afforded Canterbury to partner with the non-profit organizations to tackle larger contracts and projects.   The relationships that Canterbury established play a significant role in their growth, and since inception in 2004, they haven’t looked back!

As they grew, Canterbury established a Mentor- Protégé’ relationship with the W.M. Jordan Company that has turned into an invaluable partnership.  The business ideals and experience that Canterbury possess have paved the way for them to become an innovative leader in the construction industry.