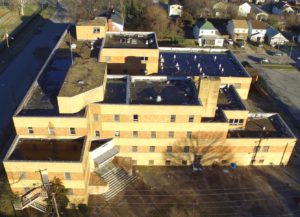 A Richmond-area development group has purchased the vacant Whittaker Memorial Hospital and could begin renovating the historic building into a 62-unit apartment building by the beginning of next year.

Whittaker Development II LLC closed on the purchase for the Southeast Community landmark last Thursday, said Junior Burr, a partner in the group and president of Canterbury Enterprises, a Richmond-area construction company. The sale price is "substantially north" of the $600,000 that C'est La Guerre LLC, the old owners, paid for the building last March, said John Biagas, Burr's partner and president and CEO of Bayport Electric in Newport News.

Burr and Biagas declined to say what the sale price was. Public property records have not yet been updated.

Construction on the building, located at 1003 28th St., will likely start in the first quarter of next year and is estimated to take about a year, Burr said. That could change as they continue to devise the layout, he said.

The purchase is a tangible development for the vacant hospital, which has seen multiple plans flop since it was condemned in 2002. Among those were an alcohol abuse rehab facility, an apartment complex and veterans' center, according to Daily Press archives.

Whittaker Development LLC, which Burr also had a stake in, had originally planned to do the project and even got planning commission approval over how they would lay out their parking spots. But it went defunct when another partner pulled out this year, Burr said. Whittaker II was created after Biagas agreed to come in about two and a half months ago and co-fund it.

Canterbury and Bay Electric will do the construction and lighting work for the project, Biagas said. This project isn't like the other failed ideas, Biagas said, because Burr has mostly cleared the major hurdles — one of them being last week's purchase.

"I just think that we're going to turn around this hospital that's got a lot of history on it and hopefully make it a gem there and take a blighted building, bring it back to life and make it a place people can be proud to live in," Biagas said.

The project will put 62 one- and two-bedroom apartments into the existing building, which is on the National Register of Historic Places. The number of units could change slightly as an architect tweaks the design, Burr said.

Whittaker Memorial Hospital was built in 1943 and was the first hospital in Newport News where black residents could get treatment beyond a clinic inside a jail, according to a nomination form that later certified the hospital as a national historic place. It was also built and designed by black doctors and architects, the document said.

The hospital closed in 1985, and the Salvation Army used it for a few years before it was condemned. It has been vacant since 2002.

This is the fourth time the property has changed hands since 2004. It was purchased by C'est La Guerre in 2002 before being sold to Key Elements LLC, property records show. That company's owner had planned to make the building an apartment complex for disabled veterans but defaulted on her loan, according to Daily Press archives. C'est La Guerre bought the property back in March 2015.

The new group will be applying for less-competitive tax credits, Burr said. If they get those and have a sound financing package, Newport News' housing authority will grant $709,000 to the project from HOME funds — money that the U.S. Department of Housing and Urban Development gives to localities for rehab projects, among other things, Wilds said. It will also offer eight Section 8 housing vouchers for future tenants, she said.

Biagas said that they're hoping to buttress the project with other tax credits and could nail down the entire financing plan in the next 60 to 90 days.

Wilds said the group was looking at a $13 million project cost last fall. Burr didn't have an updated estimate on Wednesday.

"Financially and from a renovation standpoint, it's a tough project," Wilds said. "I'm really pleased that it looks like it's going forward."

View all posts by: Elamm