Affordable Housing On South Side

article posted in the Richmond Times Dispatch on ?
by Jeremy M. Lazarus 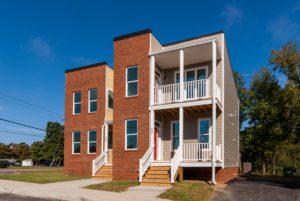 As a black contractor, Gerald Burr Jr. is taking a rare step.

He's creating his own development rather than just bidding for work on someone else's project.

The owner of Canterbury Enterprises LLC is undertaking a $6.7 million development called the Townhomes at Warwick Place that will feature 40 townhouse-style apartments on South Side.

Mr. Burr said the development is planned for the intersection of Warwick and Old Warwick roads and should take about a year to complete. He expects to start work later this fall on the units that all will have three bedrooms and 2½ baths.

He's now waiting for City Council to approve a $150,000 grant to Canterbury to provide the final financial piece for the development.

The proposal, which appears to be headed to approval Oct. 13, calls for city to pay the incentive grant in $30,000 installments over five years once the apartments are complete. The grant is aimed at supporting the developer's efforts to create affordable housing.

Mr. Burr already has received a state tax credit to keep the apartment rents affordable. The rents, he said, would range from around $560 a month to about $960 a month, based on family size and income.

Ron N. Johnson, a member of the city's Economic and Community Development Department, told council's Finance and Economic Development Committee that his department supports the grant to enable the project to move forward.

Mr. Johnson said the proposed units are targeted toward families with children and would help fill a gap in the market in that area. At least 10 of the units also would be designed for people with disabilities.

He said, based on current projections, the development would pay more in real estate taxes than the grant. He estimated the 40-unit development would bring in least $42,000 a year. The incentive grant he said, would ease the tax burden in the first five years.

This project will add Mr. Burr to the select list of black contractors and developers who are undertaking their own projects. Ronald L. Stallings and Kelvin Hanson are among the best known for projects they have undertaken in Jackson Ward and in Blackwell.